As a follow up to Eric’s two posts about his experiences playing his Undead warband at the Mordheim 2022 event, I wanted to describe my experiences. As followers of this website may know, of my brothers and I, I do not do much in the way of building models and painting, largely due to mental health issues, which you can hear more about on episode 91 of our podcast. When I attended the Mordheim 2019 event in Helsinki, Ana Polanšćak was kind enough to build a Witch Hunters warband for me to use. After the event, she very generously gifted me four of the miniatures from the warband. For this new event, I decided it would be fun to use those miniatures and explore what has happened to them in the three years that have elapsed since.

Between the Bolter and Me is about to finish its 10th year as a blog! It was another productive year, continuing our Twitch streaming and podcast, and even participating in an event! As the year comes to a close, we want to extend our best wishes to all of our readers this holiday season! The festive frog servo skull was drawn by Adam and colored in Procreate. 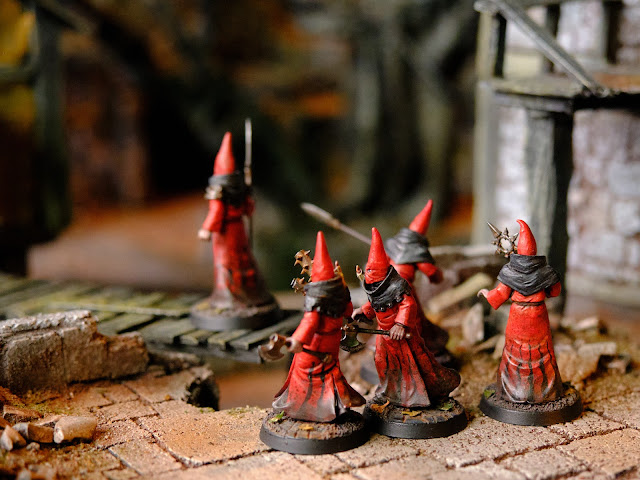 Once I heard the words “Meat Grinder” spoken aloud in a tavern. Did I see who said these words? No. It could have been anyone in that squalid domicile. I knew they spoke of a vampire. Certainly. A no life king that could not be seen via conventional means, the corrupting touch of wyrdstone stealing ever more of what tied it to the realms of mankind. Murmurs told of Reiklanders twisted until deformation, rupturing into bloody pieces. Bands of mercenaries flayed into grisly smears. By 2020 IC, talk of the “Meat Grinder” faded to obscurity, save rumors that even the ratmen of Eshin chittered of a faceless stygian terror in cursed tunnels. And now in the calendar year 2022, the ratmen are gone. I hear people whispering of it everywhere. Perhaps everyone touched by that place has known all along. I am called back to the City of the Damned. I am called to Mordheim.

Late last month I got the opportunity to play a fabulous Mordheim event in Houston Texas! While we had an initial post showing some photos from the event, I also wrote one detailing the first three games I played at the event with my Undead warband. I had the opportunity to play one final game at the event, which I wanted to recount in this post. It was against the legendary Jimmy Henriksson (@the_phoenecian), who also took part in Mordheim 2019!

Dragged into Turbolasers Episode 97 - We go back to the City of the Damned, a Mordheim 2022 recap


In this episode we are joined by Bill Ford, host of Mordheim 2022, Eric of Eric’s Hobby Workshop and Alex of the new YouTube channel Tabletop Wizards to talk about the recent event Mordheim 2022! We discuss what it is like to attend a small narrative/hobby focused event like Mordheim 2022, and how it does not need to be intimidating. We also detail the warbands we used in the event and some of the crazy and unfortunate happenings that occured in the City of the Damned. We speak at length about things we would do differently if attending the event again or one in the future. We also talk about how YouTube may be helpful to encourage others to try to host their own narrative events. Finally, we talk briefly about what is next for us with Mordheim!
Read more »
Posted by Eric Wier No comments: