For the first episode of 2018, we start by discussing the newly revealed Gregor Eisenhorn model, celebrating 20 years of the Black Library. We spend the remaining part of the episode talking about the new Adeptus Custodes models and how they compare to the first Custodes released in the Burning of Prospero game.

A look back: Notable Hobbyists and Blogs of 2017 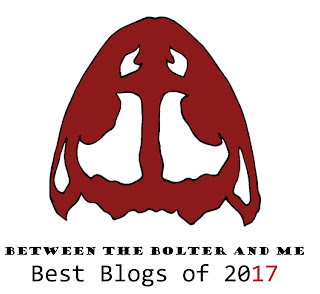 2017 has come and gone, and we have reviewed our favorite models of the year, and also summarized our own work on Between the Bolter and Me. To truly wrap up 2017, however, we have the third and most exciting part of the yearly recap posts: highlighting some of our favorite blogs and hobbyists! It was a fantastic year, filled with so many talented hobbyists that it would be impossible to name them all. Instead we decided to showcase a small selection of blogs/hobbyists that kept us motivated throughout the year. We made special effort to focus on ones we have not featured previous years, but would highly encourage you to look at our favorites from past years, as many continue to produce stellar work (2016, 2015, 2014)!

It is hard to believe, but 2017 has come to a close, marking five years for Between the Bolter and Me! Just like each year before it, 2017 proved to be quite different from the previous years. While 2016 was filled with attending collaborative events (the Pilgrym and Curse of the Alabaster), 2017 was much more introspective, as we honed our image of what makes a responsible and effective model (namely by examining female representation as well as logical anatomy). We also learned a lot of new techniques, including resin casting and working with non-acrylic paints. With this post, we wanted to recap all of the projects that we have been working on over the last 12 months.
Read more »
Posted by Eric Wier 11 comments:


After his success with the Curse of the Alabaster event, Jonathan Hartman (known as shibboleth02 of Instagram), decided to host a new event, this time set in the Lesotho 2-12 laboratory complex, a labyrinth research station that has been overrun by zombies! If you want to know more about the narrative of the event, Kristian Simonsen, of the Secrets of the Void fame, wrote two exciting yarns, one introducing two Inquisitors interested in doctor Ignace Valantion from Lesotho 2-12, the other dealing with an old guard veteran trying to escape being trapped with the research complex. Being intrigued by the event, which you can watch unfold by following the hashtag #lesothotwotwelve, particularly by the excellent civilian scientists from WilhelMiniatures, I decided it would be fun to build my own NPC scientist for the event!