After being in the works for years, nearly all of the Kingdom Death Kickstarter releases have been produced, and Adam Poots is working towards introducing new things to the game. For one thing, he has started to produce plastic versions of some of the older, limited resin kits.  While many of these are seedy pin-ups, one that stood out to me was a fully armored female knight, reminiscent to the Black Knight that I assembled earlier this year.  Along with being in plastic for the first time, this knight, Percival, came with a few cards to use her in Kingdom Death: Monster.  With these things in mind, I decided to purchase the model and put it together and wanted to let you all know what I think of her!

The Pilgrym: An Exchange of Hands - the final moments of the Daylight Wall Anomaly 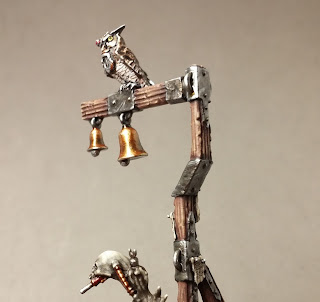 Immediately after finishing the Pilgrym Game,  I knew that I want to write a short story describing the final events of game from the perspective from one of our main characters, Roland Arnesen.  He is one of our more interesting characters. a headless mercenary from the Ordo Machinum, who infiltrated the Church of the Red Athenaeum to help locate the Pilgrym.  What's more, he even has a cyber-owl companion named Bronwen!  Roland and his feathered friend played a small, but important part in the Pilgrym game, and I felt writing about it might help provide some additional context to event, and highlight one of the many plot lines threading through the game.

The story was posted earlier on Iron Sleet, but I wanted to post it here, as well. As an addition, the ever talented Aletheia Atzinger wrote some parts in Bronwen's perspective which have been added! I hope you like it!
Read more »
Posted by Eric Wier 12 comments:

Dragged into Turbolasers Episode 9: The Pilgrym


Eschewing the normal structure of our podcasts, this entire episode is focussed on recounting the events of the Pilgrym event held in Nottingham.  We describe the scope of the event, both in terms of the storyline, rules used, the people involved, as well as talk about the events leading up to the game, and Warhammer World in general.

The Pilgrym: Told in pictures

The dust has finally settled from the massive undertaking that was the Pilgrym event.  It is difficult to convey how awesome it all was, from playing the game to meeting all of the talented individuals that took part in it.  My brothers and I took a whole host of pictures during the event, and have endeavored to show a selection of them with descriptive captions to help convey the story of the event, and reveal the fate of the elusive Pilgrym!