When starting to build the first Deathwing terminator with a modified thunder hammer, I really just wanted to see if I could do it effectively.  It seemed like a good way to start out the year, something rather straightforward that I could easily pick up later, expanding the unit.  The first went so well and was so fun to make, however, that I immediately wanted to make another!  Now, less than a week later, the second Deathwing terminator is complete, ready to crush the skulls of those stand before him!

I have been playing a Deathwing army for a long time, starting sometime back in the 3rd edition of 40k. Since then, terminators have changed quite a bit, but it was in 2008, with the release of the 5th edition Space Marine codex, that they really saw a boost in their combat prowess. I am speaking, of course, about the storm shield, and its boost to a 3++ (invulnerable) save. For the first time ever, it was easy to get an invulnerable save that had a greater than 50% chance of succeeding (it was, as they say, the new black).  It took awhile, but eventually the Dark Angels got an FAQ that improved their shield to that of their Ultramarine counterparts. I was thrilled, and immediately purchased a box of assault terminators, intent on adding a new unit to my Deathwing force. But after carefully trimming all of the pieces, I stopped. Having the models in my hands, I finally convinced myself of something that had been troubling me for years, their thunder hammers were simply too big. So I resolved to convert them, but nothing really seemed like a suitable base for new hammers, and the terminators sat in their box. Now, many years later, after playing some games of 7th edition, I realized my army would really benefit from a few thunder hammer/storm shield terminators (THSS).  Adam and I began to discuss possible ways to make some improved (in our opinion) THSS terminators.

It is hard to believe that Between the Bolter and Me has now been around for over two years. The blog has served as a tremendous way to encourage all of us to continue pushing our abilities as hobbyists. This past year has been particularly successful, with us completing more conversions than ever! Furthermore, we have tried our hands at increasingly complex conversions. With 2015 just beginning, we wanted to review the most notable projects from the past year. This will serve as a means to help highlight those projects that still need to be finished and also provide inspiration for new projects.

A look back: noteworthy blogs and conversions of 2014 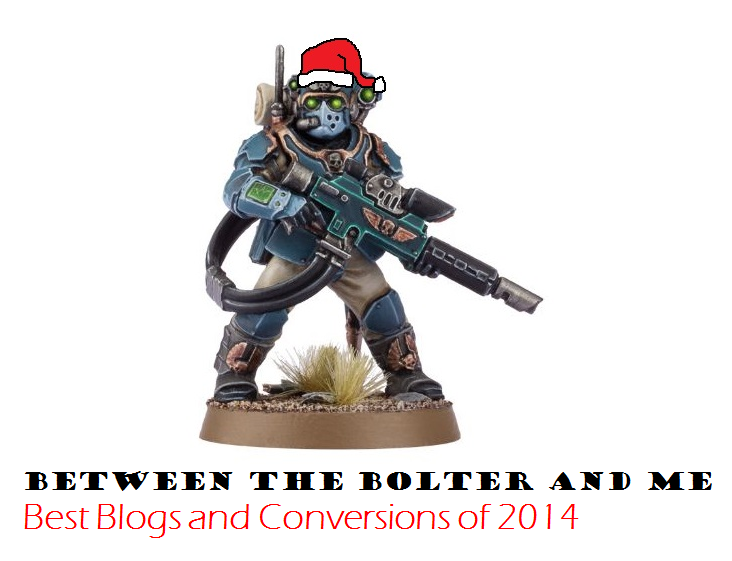 Despite being a week or so into 2015, we here at Between the Bolter and Me are still being drawn back to the happenings of 2014. The gaming/hobby community has generated a wealth of breathtaking miniatures which will certainly serve as an inspiration to many of us for future projects. So before getting caught up in 2015 and all of the projects that it promises, we wanted to take the time to highlight some of the miniatures, blogs, and hobbyists that inspired us in 2014. While we can’t hope to cover all of the incredible artists in this post, hopefully, you will find something that you missed, or be reminded of some great models from 2014!