Dragged into Turbolasers Episode 21: Warhammer 40k 8th edition is upon us!


The new edition of Warhammer 40,000 is soon to be released, and Games Workshop has been revealing a lot of information about its changes from previous editions via their Community site. We spend the episode talking about some of these changes from the perspective of people who did not get too invested in the previous edition, partially because of how bloated it became and how little it focused on the narrative elements that we enjoy most.


A large portion of my hobby time this year has been spent building a more anatomically correct true-scale marine, and then learning how to make two part silicone molds. Today I am quite pleased to reveal the fusion of both of these projects by showing you the first True-scale Space Marine that I created using silicone molds created. Not wanting the model to look too much like the original, which is still going to be turned into an Elder One for Iron Sleet’s Thorn Moon’s crusade, I decided to build an Astartes from Black Templar Chapter.


Those of you that frequent the Ammobunker forums, or follow Inq28 scene, might be aware of a new collaborative event called Tor Megiddo. In an event hosted by Alexander Winberg and Helge "Wilhelminiatures," a group of extraordinarily talented hobbyists are building warbands and ramshackle vehicles to race across the sun scorched ruin that is Tor Megiddo. While certainly conjuring images of Mad Max, the primary thing that came to mind when reading about the project was GorkaMorka (old GW skirmish game with Orks) and my early years in the miniature wargaming hobby. With memories of orks crashing rusted buggies and trucks together on the open sand, I decided that we needed to take part in Tor Megiddo in some way. With some thought, I realized it would be a great opportunity to explore a concept that I have been meaning to for quite some time, can scale historical tank models be used to build Warhammer 40k vehicles? Surely the blazing sands of Tor Megiddo would have a few tanks cruising around, alongside war rigs and motorcycles? Long before the rise of Games Workshop, with people building scale models of airplanes and tanks, particularly ones replicating vehicles from World War II. To see if using a scale model might work for 40k, I decided to build a Tamiya 1943 T-34 Russian tank. Read on to see what I learned!

Dragged into Turbolasers Episode 20: Our Kharadron Overlords and how to Mind the Gap 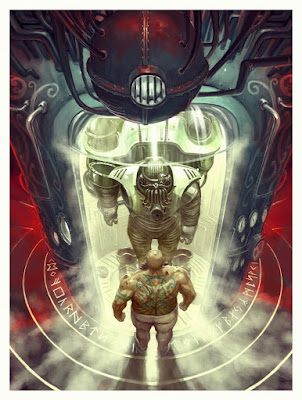 In this episode we discuss the new Kharadron Overlord model line for Age of Sigmar, paying special attention to the awkward proportions present on the models (particularly the wide thigh gap present on all of them). We end the episode talking about Forge World’s latest Primarch model, Magnus the Red.