This episode is focused around Games Workshop’s new Shadow War: Armageddon boxed game. We talk about our pleasant surprise at the game using the Necromuda ruleset, expanded to include other Warhammer 40k armies and weapons, rather than the gangs from the hive world of Necromunda. We discuss how this will affect 40k as a whole and how it might influence the Inqisimunda and Inq28 community.


Having spent the better part of two months working on sculpting a true-scale Space Marine, it became clear that I could not continue to resculpt power armor each time that I wanted to make a new true-scale marine. I decided that the surest solution would be to make a rubber mold to cast additional copies of the armor. Although the process of making a silicone mold and using it to create resin casts is relatively straightforward, it was something that I had absolutely no knowledge about, so I was quite apprehensive about it all. After watching a YouTube video or two about the process, I decided I would give it a go, and ordered a starter kit from Smooth-On. Now that I have made my first mold, I wanted to share some of the things that I learned from the experience to hopefully encourage others to start creating molds to cast custom-made or sculpted components. 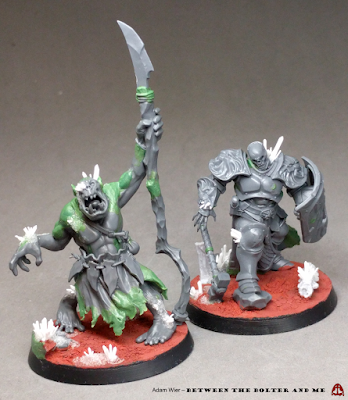 
Our post about sexism in Kingdom Death prompted a reasonable amount of discussion, and made us realize that there was more that could be said about how women are represented in miniature gaming. When seeing a game which objectifies women as much as Kingdom Death does, it is easy to look at other games which don’t portray women as egregiously, and give them a pass. In reality, all of the popular miniature companies today have issues with female representation.

Dragged into Turbolasers Episode 18: The Dark Age of Sigmar


We begin this episode by talking about the new Age of Sigmar releases, focusing on some of David Waeselynck’s work, the Vanguard-Palladors and the new Slambo. We also discuss the recently released Warhammer Quest game, Shadows over Hammerhal. We then transition into describing how Jake from Ex Profundis started a movement to bring the narrative style of Inq28 to Age of Sigmar, creating AoS28. The Age of Sigmar setting is a veritable blank slate upon which you can explore virtually any creative impulse, without feeling beholden to droves of background knowledge. This has encouraged us to start building a warband of warriors afflicted by an odd crystallizing disease, inspired by the J.G. Ballard novel The Crystal World.