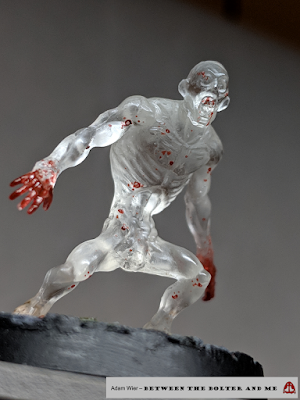 Wyrdstone is well know to corrupt, but might it also draw out and strengthen elements that are already present? Perhaps those wretched dregs of humanity, invisible in life, traveled to the City of the Damned to become something greater, only to find themselves more soulless than they were before? - Naewen, savant of Thrax

The last model we created for the undead warband for Mordheim 2019 explored the idea of emotion given intangible, yet lethal form. This closely paralleled some of the anomalies present in the novel Roadside Picnic. Diverging from this, we also wanted to show how wyrdstone might affect the wretched human inhabitants that have persisted in the city all of these years. Perhaps after persistent exposure to the corrupting influence of wyrdstone, some gradually lose their hold on reality and begin to disappear? Having learned how to make silicone molds for resin casting, we decided it would be fun to try to convert a downtrodden inhabitant of Mordheim and cast them in clear resin to represent them becoming invisible.

The actual conversion was pretty straight forward, basing the model off one of the Ur-ghuls from Blackstone Fortress. While the Ur-ghul is humanoid in form, their proportions and anatomy are not quite human looking. Although I think this helps give the model a disturbing element, I did a few things to make the model look more human, including replacing the model’s hands with smaller ones, and doing some green stuff work to modify his spine and upper chest. I replaced the head with one from the Age of Sigmar corpse cart, removing its hair and sculpting new teeth.

To make the resin version of the model, I created a two-piece silicone mold like I have in the past. Instead of using Smooth-Cast 300 liquid plastic, which cures white, I used Smooth-Cast 325 (also from Smooth-On). Although it cures more slowly, 325 solidifies clear rather than white. Fortunately, the first mold I created worked really well, with every part of the model filling correctly. While most of the initial casts I created where undyed, I experimented with adding a small amount of wash to the resin right before injecting it. This largely dispersed throughout the resin, giving the final model a relatively uniform coloration.

The painting process for the model was incredibly simple. The clear resin did much of the work creating a convincing invisible creature. To add visual interest, however, I decided to paint his hands as if they are covered in blood. To do this, I used to Vallejo Game Effect paints (72.132 - Fresh Blood and 72.133 – Dried Blood). I added additional specks of blood to the model’s body by flicking an old brush containing some of the same red paint that I used for the hands. To make his feet look slightly dirty, I used a small amount of enamel brown paints from Ammo of Mig thinned down with an enamel thinner. I experimented with painting the model’s eyes in various ways, as well. And while I liked the look of some of these, I decided against using it for the final model because I felt it went against the narrative idea of an invisible survivor. It is something I would like to try on future models, however.

Months back, when I had the idea of creating an invisible creature for the undead warband using clear resin, I was unsure how it would turn out. Having made a few molds in the past, I didn’t feel I had much to lose and decided to go ahead with it. I was able to convert this dreg rather quickly. Creating the mold took a little while, but when it was done, the model came together really quickly. With it all said and done, I am really pleased with the result, and feel it captured my original idea. Adding to that excitement, it is the first completed model for any of our Mordheim 2019 warbands (and probably the quickest model I ever painted, he he)! Let me know what you think of the model; I would love to hear any comments or suggestions.