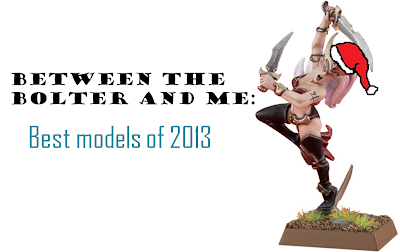 Games Workshop:
Dark Elves
Games Workshop kept up an impressive release schedule this past year, essentially managing to release a new book and range of models each month, including releases of the Space Marines, Tau, and Eldar. More notable however was their work with Warhammer Fantasy, where they finally gave a much needed revamp to the majority of the Dark Elf range. The release schedule took up two entire months, reminiscent to the Dark Eldar release in 2010, and resulted in some really nice models. I feel that one of the most anticipated kits was the new witch elf models, which have been in need of an update for a long time. And fortunately, they got Brian Nelson to help design them, and the result was excellent. They are very dynamic, and while they are still scantily clad, they were not overly sexualized, which was refreshing to see. Not only do they make superb witch elves, they will undoubtedly be a staple of conversionwork for years to come.


While I was very pleased with the new witch elves, my favorite release from the range is the Fleetmaster. The model is just overflowing with character: the tall boots, devilock hair style, jawbone collar, and boarding hook all help to fill the model with life. I have already utilized a number of parts from the model for my Duke Sliscus conversion, and may buy another copy to use in my barely-assembled Dark Elf force.


While on the topic of the Dark Elves, I feel that I need to also mention the worst set of models released in their updated range: The Spearmen. The old box of spearmen was almost laughably bad, with the models featuring massive hands, balloon feet, and spear shafts as thick as small trees. Unfortunately the new kit does not improve things very much on any of those fronts. I suppose asking for every model in a newly released range to be good is not reasonable (even the Dark Eldar, arguably Games Workshop’s finest hour in my opinion, could not escape without a few questionable models. The Grotesque being the worst offender).  .

Each time Games Workshop releases a new version of the boxed game of Warhammer 40,000, they always do their best to one-up their earlier release. In the more recent editions they have shifted more towards trying to give you two small forces, complete with a commander and a few other units. This trend has resulted in an interesting collection of models, some very nice, and others quite poor (Here’s looking at you ork warboss. While he looks reasonable from the front, a look in profile reveals his body to be about as thick a thin plank of wood). This year’s release of Dark Vengeance kept up the same trend. While the Dark Angels Space Marine models were fairly run of the mill, quite a few of the models for the Chaos force really impressed me. In particular, the Chaos Chosen models are nothing short of spectacular. What makes these models really stand apart from many of the plastic Chaos releases is that they are not simply a retooling of a Space Marine kit encumbered with brazen filigree and spikes. Each of the different sculpts has its own unique set of details that look like they were actually designed with the model in mind and not simply piled up on top of existing detail. They are some of the most impressive models the Chaos Space Marine range has received in a long time.

Forge World:
Forge World has had another prolific year of releases, including a handful of really outstanding models. Similar to last year, much of the release schedule was allocated to the 31st Millennium with the Horus Heresy. Amidst the legions of Space Marine infantry and armoured vehicles, they released three of the iconic Space Marine Primarchs, including Fulgrim (Emperor's Children), Ferrus Manus (Iron Hands), and Lorgar (Word Bearers). While I am still a little nervous about them sculpting models of the Primarchs, both Simon Egan and Edgar Skomorowski have done such a fantastic job realizing the characters that I suspect the new Primarchs will only get better.


True to their roots, Forge World released a number of outstanding armored vehicles over the course of year. The Fireraptor Gunship stands out as one of their most impressive releases, building upon the excellent looking Storm Eagle (it is astounding how much better it looks then the related Storm Raven…). With vicious looking vulcan cannons in it prow (A10 warthog anyone?), impressive ball turrets, and a sleeker profile than its transportation-oriented brother, it captures the visual elements of a Space Marine vehicle, without seeming forced, like the Storm Raven and Talon gunships GW has released.


No model really emphasizes that Forge World is still at the top of its craft with creating new tanks for the 41st millennium as well as the Sicaran Battle Tank. In a year when GW struggled to release an authentic and worthwhile Space Marine tank (the Stalker/Hunter kit was their attempt, but it ended up looking a bit forced and tired, reusing the the same rhino chassis yet again),  Forge World filled the niche between the Predator and Land Raider that has been shrouded in mystery for years with ease. The Sicaran effectively merges elements of both tanks, but maintains it own unique identity without feeling out of place beside the other tanks of the Space Marine range.  What is even better is that the kit is easier to assemble than most of Forge World’s other tanks because they cast the tracks together with the armored sides, eliminating the often painful process of fitting track pieces together. And with the release of Escalation and Forge World’s updated War Machines of the Adeptus Astartes, you can even use the tank in normal games of Warhammer 40,000 (and not just 30,000).

Wyrd:
If there was a category for biggest improvement of the year, it would have to go to Wyrd Miniatures as a whole and their entire new plastic range. In 2012, Wyrd made the switch to digitally designing all of their models and then producing them in plastic. In the past, all of their models were sculpted by hand and then cast in white metal. Malifaux has an extensive range of models, which up until their switch to digital sculpting, I was not very fond of any of them. In my opinion, the imaginative setting of the game was brought down by subpar models with a wonky, almost caricatured look to them. With the introduction of digital sculpting, Wyrd was able to remake a large portion of their more popular characters in under a year, giving them a more consistent and unified look. All of the characters now have a more realistic tone to them, and I can safely say that I like nearly all of the models.  Even if I am not a big fan of all of the aesthetic choices on some of the designs (demon babies do not really strike my fancy), there is no doubt that they are all sculpted well. Viruk from the blog Independent Painters has a nice post comparing some of the old and new models, which will give you a good idea of the stylistic changes that Wyrd has made with the new range.


Probably my favorite model from the new range is Samael Hopkins from Sonnia Criid’s Guild crew. The model abounds with interesting detail that do not seem tacked on: his American Civil war-inspired calvary great coat, his wide stance “fanning” the hammer of his impressive revolver, the partial Iron Maiden hanging from his belt.


Aside from Samael, I could probably go on for awhile talking about the neat models from the range, but I will limit myself to mentioning a few. Perdita Ortego and her wild west-inspired crew is particularly neat, with the scout Nino being a highlight. While it might seem ridiculous that he is carrying around a gatling gun, the sculptor managed to make the weapon actually seem reasonable. Sure it is large, but not overly so, like I am accustomed to with weapons on models (Games Workshop loves oversized weapons). Seamus and his crew of zombie prostitutes made a miraculous transition with the new sculpts. While the concept behind Seamus as a cross between Jack the Ripper and the Mad Hatter with a cohort of zombie prostitutes was a clever one, I never thought the past iterations of the models really capitalized on the idea. The new Rotten Belles look delicate with beautifully rendered dresses all the while being suitably repulsive looking. Seamus still maintains the old hallmarks of the character with his gigantic tophat, deranged visage, and lanky frame, but now looks believable. He went from being one of my least favorite models in the range to one of my favorites.


Model of the Year

Ferrus Manus - Of all of the models released this year, Ferrus Manus stands far above as the most impressive in my humble opinion. Although he was not the first Primarch, he was the first one that really emphasizes many of the iconic elements of Space Marines. While both Angron and Fulgrim epitomized grace and speed, with lithe form fitting armor plates, Ferrus exudes raw power with his cyclopean artificer armor with broad shoulder pads, corded muscles, and a closely shaved head. Further adding to the model’s allure was the notion that it largely took the gaming community by surprise. Unless you were heavily following the history surrounding the Horus Heresy, you probably did not have a good idea of what Ferrus would even look like. There were essentially no pictures of him for the sculptor Simon Egan to work from, and despite this he managed to create a character so familiar yet equally distinct that I could not imagine choosing any other model as my favorite for the year.