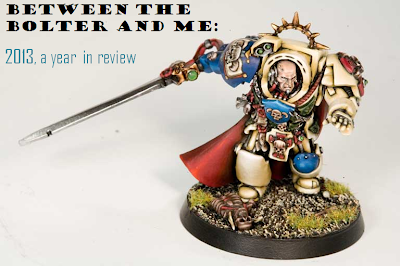 Despite buying the units for an entire Dark Eldar force back in 2010, progress building the army has been slow. Thankfully, I found a reasonable amount of time in 2013 to work on the army, resulting in a sizable collection of models assembled from wyches to character models.

Trueborn:
Since the release of the Dark Eldar codex, the Trueborn have been a staple in most army lists. Games Workshop never saw fit to release models for the unit, forcing people to convert their own. Initially I had purchased some of the domed helmeted heads from the Reaver jetbikes to use when assembling my Trueborn out of Dark Eldar warriors. Something about that idea did not sit right with me and I pushed off building them. I waited long enough that Games Workshop released a new line of plastic High Elf models. The Shadow Warrior kit sparked my imagination and became the foundation of my Trueborn.


Traevelliath Sliscus:
Another staple to many Dark Eldar lists is Duke Sliscus, his undercosted wargear and synergistic abilities making him particularly noteworthy. The release of the new line of Dark Elf plastics, particularly Shadowblade and the Fleetmaster, spurred me on to finally start converting a model for the Duke. While he is still not quite finished, he is one of my favorite conversions that I have done to date.

Archon:
One of the first models that I completed for the Dark Eldar army was also the subject of one of the blog’s first posts.  Always having a certain fondness for the ill proportioned Kruellagh the Vile model from way back in 3rd edition, I figured it would be fun to try to fix some of the more awkward elements of the model with parts from the new Dark Eldar range.

Deathwing Command squad:
Ever since 4th edition, when the Dark Angels were first able to take Command Squads in full terminator armour, I wanted to convert a squad that Belial could lead. Just using normal terminators for the task worked fine, but the thought of making a unit with each model a unique character in their own right really lingered in my mind. I am pleased to say that I was able to complete two members of the squad this year, each created with a wide range of parts that I accumulated over the years.


Tzeentch Terminators:
When a friend started to play Chaos Space Marines with the release of the 6th edition of 40k, we decided it was time to try to convert a squad of Chaos Terminators. Never being too thrilled with the Chaos version of the terminator models, this gave me a chance to try to make something more to my liking.

Guardsman Vell:
Having seen so many fantastic Inq28 models being produced over the year, I decided to try my hand at making a few models in the same vein.  After searching around for suitable bits, I stumbled on an old Gorkamorka Digga Shaman model and knew I could make something unique out of him. With some parts from the excellent Elysian Drop troop models, I created Guardsman Vell.


Inquisitor WIP:
With the first member of the Inquisitorial retinue assembled, I decided that I really needed to convert the Inquisitor. While still very much a work in process, I am pleased with how he is shaping up. I can’t get enough of those Death Korp trenchcoats (it is a shame more 40k models don’t have them…).


Grey Knightz ork Purifier:
After seeing some of my friend’s ork models designed to represent Grey Knights, I decided to try my hand at making a similar model. I opted to convert a Grey Knight Purifier armed with a psycannon. Using some of the images from the old Inquisitor rulebook, I crafted a shoulder-mounted psycannon reminiscent of that used by Inquisitor Covenant.


Now that 2014 has started, the list of projects I am working on (and hope to work on!) seems to be steadily growing. Chief among them are to convert a few more Deathwing terminators for the command squad that I worked on in 2013. Also, I have to complete the Inquisitor that I started and build a few more members of his retinue. With a little luck 2014 will be even more successful than the year past!