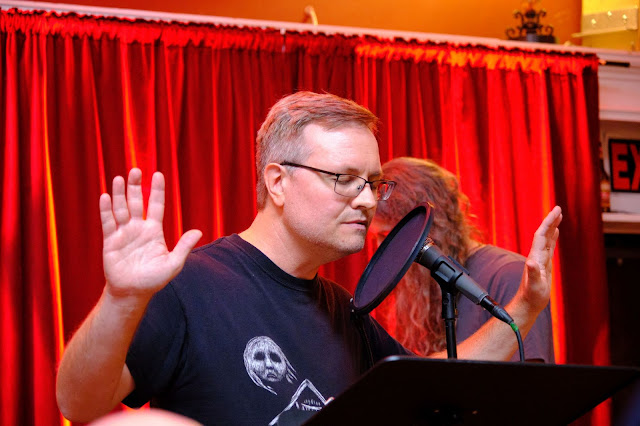 The following article was originally published on Greg’s music blog, Fine Enough, I Suppose. It concerns the written work of Thomas Ligotti, and the efforts of the record label, Cadabra Records, to bring his work to a wider audience. The outlook of Ligotti’s work is deeply pessimistic, fitting in nicely with the bleakness of the 41st millennium.

One of the most affecting and memorable live performances of my life was seeing Jon Padgett doing a reading of Thomas Ligotti’s short story “The Bungalow House”, accompanied by live guitar and electronics performed by Chris Bozzone. It was my first introduction to the work of Thomas Ligotti, a contemporary horror writer who espouses a particularly dismal world view, and uses his work as a means to explore this outlook. Padgett, a fantastic author of weird fiction himself, did an amazing job invoking the crushing loneliness of the narrator of “The Bungalow House”. I was utterly spellbound, hanging on every word, caught up in a horror that was far more affecting than the hackneyed violence that is the hallmark of many modern horror tales. I came away from the event as a fan of Ligotti’s fiction, and of Jon Padgett, as well. He read his own story “20 Simple Steps to Ventriloquism”, and I was astounded at his ability to take something as mundane as a guide book (the story is presented as a guide to becoming a skilled ventriloquist and beyond), and turn it into something deeply unsettling. This event was hosted by Cadabra Records, who had just released a spoken word vinyl record of “The Bungalow House”, with Jon Padgett doing the reading and Chris Bozzone handling the instrumentation. This event was a live recreation of that release, and the first event of its kind hosted by Cadabra Records. Although it is hard to believe now, this event occurred back in May of 2019, more than three years ago! I have been eager for Cadabra Records to host similar events, but the onset of the COVID-19 pandemic prevented that.

Much to my excitement, Cadabra Records planned more reading events in the summer of 2022, the first of which being a reading of Ligotti's "Gas Station Carnivals", again performed by Jon Padgett and Chris Bozzone. That event was in Florida, and I was not able to attend. Fortunately, I did not have to wait very long for another opportunity, as Cadabra Records set up a second event on the last Saturday of July at Retro City Studios in Philadelphia, Pennsylvania. This was another celebration of the work of Thomas Ligotti, focusing on recreating Cadabra Record’s production of “The Clown Puppet”, in a live setting. Jon Padgett was back to do the reading and Chris Bozzone to provide the accompanying instrumentation. Retro City Studio is where many of Cadabra Records releases were recorded. Barry Knob, the owner of Retro City Studios, has been the producer for most of Cadabra Records releases. The choice of Retro City Studio as the venue made the event seem all the more special, due to its deep history with the label.

When my brother Eric and I arrived at Retro City Studios, it was a warm July evening, the studio nestled in a calm residential region in the northern part of Philadelphia. A small number of eager fans of weird fiction had gathered outside. When we were let into the studio, Cadabra Records owner, Jonathan Dennison, gave each attendee a 10” record that was pressed specifically for the event: “Chris Bozzone – Selected Themes Inspired By Thomas Ligotti”. Furthermore, Dave Felton was handing out a minicomic that he made specially for the event called “Puppet Nonsense”. Felton has done artwork for Cadabra Records in the past, notably for the record of Padgett’s “Origami Dreams”.

The main room of the studio was small with maroon walls and red curtains against the far wall, with a piano and a collection of synthesizers set up for the performance. As it was a studio, it was clearly not built to contain an audience, though a collection of folding chairs were set up for all of the attendees. A small puppet in the form of a clown was hanging above the frame of one of the doors leading out of the main room, doubtlessly added specifically for the evening.

The performance began with Chris Bozzone greeting everyone and detailing the outline for the night’s events. He introduced us to Barry Knob and touched upon the history of Retro City Studio. The first story of the night was one of Padgett’s own stories, “The Mindfulness of Horror Practice”, and was being recorded for a future Cadabra Records release. The story is set up like a guided meditation, but quickly moves past the relaxing aspects of a conventional meditation and focuses on the horror of living. Much like Padgett’s “20 Simple Steps to Ventriloquism”, it subverts expectations to create something truly memorable. Just the notion of being in the room while one of Cadabra Records’ releases was being recorded was a thrill, to be part of it beyond just purchasing them and listening to them.

After “The Mindfulness of Horror Practice”, Padgett read the titular story of the night, Thomas Ligotti’s “The Clown Puppet”. In the story an unnamed narrator recounts his visitations by a puppet clothed as a clown, and relates how they are just one example of how his existence consists of nothing but ridiculous nonsense. In particular, he describes his visit by the clown puppet while working at an out-of-the-way medicine shop in the dead of night. While the narrator has been visited by the clown puppet throughout his life, always while he was employed at some dreary occupation, the medicine shop visit was unique in several distinct ways. While I will not ruin any of it for those who have not read the story, the narrator comes to suspect that there is absolutely nothing special or unique about his own life or his puppet visits. Padgett is a natural performer, knowing just the proper cadence and rhythm to adopt while reading the story. His inflection perfectly changed to capture the narrator’s moods throughout the piece: indifference, annoyance, desperation, and a resigned acceptance of his nonsensical place in the universe. All of this was heightened by the somber piano playing of Bozzone, augmented by synthesized tones and the occasional appearance of acoustic guitar. He expertly played with volume, at times staying subdued, whereas at moments of the narrator's duress, the sound would crescendo to almost deafening levels.

Beyond “The Clown Puppet”, three other Ligotti stories were performed: “The Red Tower”, “I Have A Special Plan For This World”, and “This Degenerate Little Town”. These three stories were included on Cadabra Records second Ligotti record. It was a night full of tremendous Ligotti stories, each presented with an eye for even the smallest detail, and bringing them to life in the most exhilarating way.

After the festivities, my brother and I were afforded the opportunity to talk with Padgett for a short time, discussing our favorite Ligotti stories. I expressed to him how intrigued I was with the perspective of the story “The Shadow at the Bottom of the World”, as if in first person plural. Where “I” is replaced with “we”, and the narrator relates the feelings of all of the inhabitants of a single town. He told me that William Faulkner’s short story “A Rose for Emily” is written in the same way. I am very excited to read through that story now. We also talked with Jonathan Dennison at length about our mutual appreciation for weird fiction. His passion for Cadabra Records and exposing people to eclectic pieces of weird fiction was evident, ensuring that the future is bright for the label! If you have an interest in weird fiction, or even just storytelling, I strongly encourage you to check out Cadabra Records.