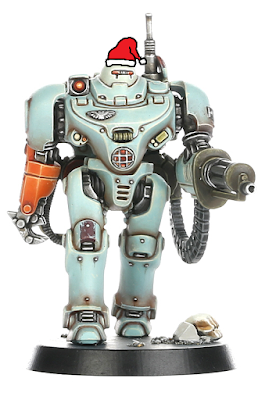 Another year is almost over, which means it is time to reflect upon all of the models Games Workshop released in 2018, and talk about some of our favorites. It was another good year for GW with a lot it diverse releases, including a new edition of Age of Sigmar and 8mm plastic Titans for Adeptus Titanicus. And while no release was perfect, they were more complete and compelling then years prior. Some were so good that we didn't even feel the need to convert them. With this post, we wanted to talk about some of these highlights and choose what we think is the best release of the year!


Although released right before the end of the year, the newest installment in the Warhammer Quest series of boardgames, Blackstone Fortress, was possibly Games Workshop's most impressive and unexpected release. Building off the success of Silver Tower, GW brought the dungeon crawler into the 41st millennium. Being a stand-alone product, the game was a perfect opportunity to explore lesser known aspects of the universe. The game comes with a whole host of excellently crafted character models ranging from two Rattling snipers to a lumbering Man of Iron. Although snap-fit, all of the models in the game are incredibly well detailed, with crisp definition. In addition to creating models for things rarely seen outside of 40k lore (such as Rogue Traders and Navigators), they also explored more common elements with a more refined eye, such as finally creating Traitor guard models, rogue psykers, and beastmen. Almost all of the models will serve as an excellent basis for all sorts of conversions. Importantly, it also shows that GW is listening to people asking for the inclusion of more non-objectified female models. The traitor guard have multiple female soldiers that could easily be missed because they are sensibly wearing identical armor to their male counterparts (which also suggests that GW realizes that all of their models do not need to be assumed as male by default). More than any other 40k release of the year, Blackstone Fortress has gotten us excited for what the future holds for Warhammer 40,000 and its advancing lore. Hopefully this is a sign that Games Workshop will start to take more design risks like they have with Age of Sigmar.


After years of waiting, Forge World finally released a modernized version of the classic Adeptus Titanicus. And while the rules got a major overhaul, what stands out most about the game are the fantastic models. Forge World expertly miniaturized all of their iconic Titan designs down to 8mm, maintaining virtually all of the detail of their larger resin counterparts, but in glorious plastic. Now anyone can experience the joy of assembling and painting a Warlord titan, without needing to spend thousands of dollars and struggling with resin. Impressively, the larger Warlord models were designed with magnetization in mind, allowing one to easily swap weapon arms. Even if you never plan on playing the game, it is hard to resist buying a box of the tiny 8mm Knight Titans, standing at about the height of a Primaris Space Marine. We are excited to see what new models are released in the coming year; maybe even an Imperator-class titan!?


Specialist Games’ juggernaut Necromunda saw a remarkable year, releasing re-designs of several of the most popular gangs, including House Orlock, Van Saar, Cawdor, and Delaque. Like the previously released gangs, the new editions this year added a wealth of conversion opportunities for Inq28 and AoS28. Perhaps most exciting is the addition of armored body gloves (Van Saar) and trench coats (Delaque) to the available plastic conversion components. Both body gloves and trench coats are featured heavily in the novels from Black Library, but are surprisingly absent in the Warhammer 40k model line. Of all of the gangs released, our favorite was unquestionably House Delaque. In an effort to give the models a stealthy vibe with slender and tall silhouettes, GW ended up producing models with arguably the best proportions and poses in years. The arms and hands of the models are thinner and smaller than nearly everything in GW’s line of models save maybe the new Nighthunt models. None of the models are adopting GW’s prolific squatting poses (just try and stand like one of the Van Saar models...); instead nearly all of them are standing tall and proud. We are sure to see innumerable conversions using these new kits in 2019!


Last year, Games Workshop released Shadespire, their first major effort at creating a small scale miniature game for competitive play, trying to take on the likes of Fantasy Flight Games’ X-Wing. We have been quite impressed by its seamless integration of miniature and card game mechanics, as well as the relatively cheap entry cost of the the game. Excitingly, a second game was released using the same basic mechanics, shifting the setting from Shadespire to the Nightvault. This allowed Games Workshop to create many new warbands, each quite distinct from those released for Shadespire. Since each warband contains less than 10 models, the sculptors were able to inject a huge amount of energy and character into each model. Zarbag’s Gits has a motley band of Moonclan grots juicing on madcap mushrooms (which were also a forshadowing for the upcoming Gloomspite Gitz army book coming out in early 2019). The Eyes of the Nine does a great job of incorporating all of the major AoS Tzeentch elements into a small warband, from all the daemonic horrors, to the beastly Tzaangors, and the muscular Kairic Acolytes (they even included a female!). While the Stormcast warband included in the boxed game are largely forgettable, the spectral Nighthaunt warband is fantastic. Led by the Briar Queen, a regal looking ghost with a thorny whip of roses, the the tattered miscreants each look unique with shackles, nooses, and other objects of torment. It is encouraging to see that Games Workshop is continuing to expand the Warhammer Underworlds line of games and models. It serves as a great way for them begin tapping into the wellspring that is the mortal realms, as well as providing a great source of unique models for conversion opportunities!


It is hard to deny that Age of Sigmar had a strong year, with the release of its second edition along with a host of new armies, including the chilling Nighthaunts and the serpentine Daughters of Khaine. But of all the new armies, the most visually impressive and also the largest departure from connections to the Old World are the Idoneth Deepkin. Rather than simply making new High Elf sculpts, Games Workshop decided to try something different, adding a nautical theme to their newest line of elves. Although we had seen some new concepts for Age of Sigmar, such as the Kharadron Overlords, which took the steampunk element of the dwarves and dialed it up a few levels, the Deepkin have incorporated the ocean, something that has largely been absent in all of GW IP. Aelves ride atop the mammoth sea turtles, lithe eels, and horrific sharks. The aleves themselves have a unique look to them as well, some with long majestic robes, while other look more like streamlined Hoplites. Most stunning of all is their model of Eidolon of Mathlann – Aspect of the Sea. The model towers over everything else in the range with a long cloak of flowing water, towering over everything like a tidal wave ready to break. The model’s armor has all manner of impressive details, from tiny overlapping fish scales to shoulderpads that shift into fish heads. Sometimes it feels like every range gets a large character models by rote necessity, this model does the opposite, showing us that such models truly have a place and can elevate an entire model range. These models also have a lot of conversion potential that is only just starting to be tapped into. Nowhere is this better illustrated than Hagan’s Caravan of the Hundred Moons, created as part of Blog de Kouzes’ 2018 Advent calendar (where members of the blog created AoS warbands to show off throughout December). With relatively simple, yet elegant conversions, he was able to change the Deepkin models into characters out of Arabic folklore.


While the year has graced us with a wealth of fantastic models; choosing our our favorite was surprisingly easy. Despite all the flashy and large models released this year, none excited us more than the Imperial Navigator, Espern Locarno from Blackstone Fortress. Rarely does Games Workshop release a model that we feel can be assembled without conversion, but the Navigator is one such creation. The model embodies many of the aspects we strive to achieve in our models, such as subtlety and realism. Games Workshop tends to favor bombastic warriors with mammoth weapons, yelling faces, and nonsensical squatting poses; the navigator has no overt weapons other than a thorned cane and an obscured sidearm, an unreadable masked face, and a stoic straight-legged pose. The model is also not laden with common Imperial “motifs,” such as an overabundance of purity seals, skulls, or the obligatory Space Marine-scaled plasma pistol. Despite not having these things, the model clearly reads as an Imperial operative. The model shows that Games Workshop is willing to try new things and explore neglected elements of the lore with care. We cannot wait to see more models like Locarno in 2019!