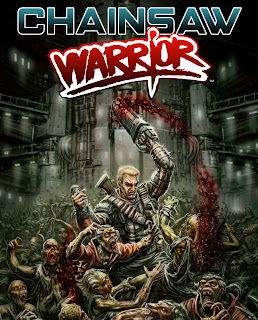 The game has a reputation of being extremely hard, but seeing as it has been out of print for a long time, newer gamers have not had a chance to see that for themselves (unless you want to pay upwards to $100 to buy a copy on ebay). Fortunately, Auroch Digital, a Bristol, UK-based game developer, took on the task of digitizing the game and making it available for smart phones and PC (I have been playing the Steam version). I am pleased to report that Auroch Digital have done an excellent job of bringing the game into the digital age. It is basically a carbon copy of the original game, maintaining all of the old artwork, and faithfully reproducing the game’s mechanics without any gameplay changes (I found and read through a copy of the original game’s rulebook to confirm this). There are, however, some minor changes to the weapons, some of which were made to be slightly better. Beyond the tweaks to the weapons, the only addition that I noticed was adding multiple difficulty settings, with Hard being how the game was meant to be played.

At the start of the game, you determine the characteristics of the nameless warrior (endurance, wounds, hand-to-hand, reflexes, and marksmanship). These are all derived by rolling D6s (how many depends on the attribute), and they determine your effectiveness in combat. On the easier difficulties (easy and medium), means are in place to make sure the values you get for each attribute are at least marginally good. Aside from your attributes, you also roll to see how many points you can spend on equipment to bring along on your mission. This equipment is divided into 5 main categories: Hand-to-hand weapons, guns, heavy weapons, devices, and clothing. On the easy setting, you can specifically choose what items and weapons you want to use. On medium and hard, however, you can only choose what categories you want to spend your equipment points on, and then it randomly determines what you get.


Once your character’s attributes are decided and he is equipped, you are ready to start fighting your way through the building towards Darkness. Chainsaw Warrior is a card-based game where you have 108 “House” cards that represent the building you are infiltrating. Those 108 House cards (corridors, elevators, stairways, etc.) are randomly divided into two 54 card decks, the 2nd of which you shuffle Darkness into. To play the game, you draw cards from the 1st House deck, and resolve any encounters that might be listed on them (most of the cards have a monster associated with them which you need to fight). Each card takes 30 seconds to resolve. Once you have fought your way through the 1st House deck, you move on to the 2nd, which has Darkness somewhere shuffled into it. When you draw Darkness, you enter into combat like any other encounter, and if you manage to defeat him, you win the game. As it happens, just getting to Darkness is a challenge, and when you do, there are only 2 weapons that can kill him. Those are the Laser Lance and the Implosion vest (which you blow yourself up to kill him). You start the game with the Laser Lance, however, it only has 3 shots. If you use those 3 shots before confronting Darkness, you have to leave the building to get another Laser Lance. Not only does this waste a lot of valuable time, you are then forced to start at the beginning of the 54 card deck after getting a new Laser Lance. Aside from running out of shots, there are numerous ways to lose your Laser Lance. There is a lunatic card that randomly takes an item, and there is a suicide bomber that can hurt you and destroy your equipment. Furthermore, there are several obstacles that if you don’t have the proper equipment to surpass, you have to backtrack to find a new route, or even leave the building and start over (if you encounter a chasm and don’t have a rope launcher, you have to leave the building and start the 54 card House deck anew).

I have played the game many times in the two weeks or so since its release on PC, and I can confirm that the game is a difficult one. Somewhat to the game’s discredit, its difficulty is largely because it is almost entirely based on luck. Luck that you don’t run into impassable obstacles when moving through the building. Or if you do run into one of those obstacles, luck that you have the right equipment to surmount the obstacle (lock pick to open locked doors, rope launcher to cross chasms, etc.). Luck that when you roll to determine character’s attributes that they are reasonably high. If you end up with a low Hand-to-hand combat score, you basically cannot win, in that most of your fighting is close combat. However, a good close combat value is not all you need to win. In order to kill Darkness, you need to shoot him (you cannot harm him in close combat). In order to shoot an enemy, you have to first roll a reflex test to see if you can get off a shot before the enemy engages you in close combat (you roll 2 D6 and have to get equal or below your reflex value. So if your reflex value is low, that can be difficult). If the reflex test is passed, you move on to seeing if your shot hits the opponent. Each firearm has a certain value that you must equal or exceed on 2 D6 to hit and kill the opponent (this value changes per enemy). As mentioned earlier, the Laser Lance is the only weapon that can harm Darkness, and you need to roll an 11 or higher on 2 D6s to hit him. So, your odds are low, even if you can get a shot off. If you miss, you proceed to hand-to-hand combat. At this point the only way to kill Darkness is if you are given the opportunity to fire a “Lucky Shot” which will be successful on the roll of a 6 (or on the roll of a 5, you get to shoot again as normal). The only way to improve these odds is if you have a good Marksmenship value, which can lower the number you need to roll to hit. There is an optical scope called C.A.T.S. which can be attached to a firearm which lowers the “to hit” values for each monster by 2. So, if you can get that and put it on the Laser Lance, you chances of hitting Darkness are greatly improved. But as mentioned earlier, on the harder difficulties, you cannot specifically choose what items to take along. Because of all of this, the game has very little in terms of strategy. You can certainly spend time deciding on the best equipment and weapons to win, but it largely comes down to luck as to whether you actually get them.

While the heavy reliance of luck is certainly a low point in the game’s design, the game plays quickly enough that after being thoroughly trounced, it is easy to start all over and see if things go better the next time. And there are enough different weapons and items to keep things interesting, along with some pretty frightening creatures to fight, even if you are fighting zombies most of the time. All of the problems with the game are ones inherent in the original game’s design, not something that Auroch Digital did poorly (in that virtually nothing was changed when it made the transfer to digital). Encouragingly, there was a recent update made to the game which corrected some spelling errors and added 2 new items to the game (which were from an expansion that was included in a White Dwarf magazine). So that makes it seem that Auroch Digital is intent on supporting the game. There are still a few items from that aforementioned expansion that have yet to make it into the game (a powered exoskeleton and DUM-DUM bullets), so hopefully they will be added in a future update.

Even if the game does not provide too much tactical depth, it is an interesting look into game design in the mid-late 80s. While the game market today is flooded with zombie themed games, I imagine that was a different story in 1987. Even though the game is not set in the 41st millennium, there are quite a few glimpses towards what was to come from Games Workshop, with Chaos cultists and chainsaw blades. For only $5, I think any fan of Games Workshop should give the game a try.