A friend recently started down the path to Chaos with the release of the 6th edition Chaos Space Marine codex, and although he wanted a Chosen heavy army (led by Abaddon), I convinced him that he really should have some terminators (he has been on the receiving end of my Deathwing for years; the closest equivalent he has played with are the lowly Mega Armoured Nobz for his Ork army...).  Over the last few months, we have been slowly working on them, trying to imbue some Tzeentchian elements into them (4++!).

For being based on the excellent plastic Space Marine terminator kit, the Chaos terminators leave a lot to be desired, and are a pretty large step back in quility.  They are replete with huge dull spikes and over-sized skulls. All of the details on the models have very rounded edges and are not well defined or distinct (which is the opposite of the Space Marine Terminator kit).  Each of their weapons have comically large blades and chainsaws attached, all with minimal detail.  Their combibolters have a shoddy cobbled together look, and are even larger than their SM counterparts.  Unfortunately, they do not give you enough powerfists to equip the entire squad, and the two they do give you were based on the same SM arm, and therefore have the same limiting outstretched pose.  In an attempt to combat this lack of options we decided to use the parts from the plastic Chaos Terminator lord to supplement the squad.  To my shock, the powerfist he comes with is the same powerfist that is essentially duplicated twice in the Chaos terminator box (it was modified to be brandishing its middle finger, but due to the overall pose of the arm you really cannot display it properly).  The lord comes with a combi-melta, but it too is simply the one from the Chaos terminator box with more gaudy spikes and extraneous bolter magazines and dangling bolter rounds.  The more I worked with both kits, the clearer it became that they were pretty lazily designed and rushed.  They are certainly salvageable, but require much more effort and attention to detail to get them looking nice when compared to the corresponding Space Marine kit.

We wanted the unit to have a very unified look to it, and decided that giving them matching/similar helmets would be a good way to initially achieve this goal.  Most of the stock Chaos terminator helmets have rather extravagant horns that we felt were distracting and not very Tzeentchian. Initially we considered using Thousand Sons marine helmets for the models, but decided the headdress adorning them was a little much and took away from the brutal, pragmatic tone we were trying to achieve.  We ended up choosing the Warhammer Chaos warrior helmets. By simply removing their horns and a bit of sanding, they fit nicely into the terminator bodies.
Being unsatisfied with the storm bolter/combibolters from the kit, we knew we would either have to look elsewhere or remove an extensive amount of the spikes and needless embellishments. For the reasonable cost of 5 points per model, every Chaos Terminators can get either a combi-melta or combi-plasma gun.  Having always been fond of the combi-plasma gun that came with the plastic Space Marine Captain coupled with the rise in plasma weapons in the 6th edition, we decided that we could give two of the terminators combi-plasma guns.  The smaller size of the guns really benefited the models more than I had initially anticipated, accenting the terminators’ bulk and imposing stature. 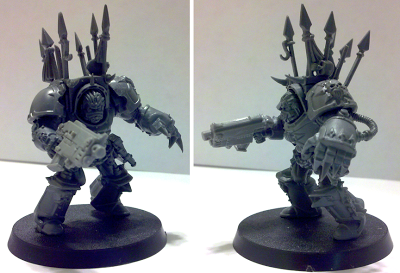 Note how this terminator's powerfist is nigh identical in pose to the one in in the picture above...

One of the most extensive conversions in the unit was on the one member’s combi-meltagun. The original one in the kit was a little too ostentatious for my liking, with a massive chainblade and a ridiculously looking belt of bolter rounds. To tame the monstrosity, I carefully cut away the chainblade and replaced it with the front of one of the old 2nd edition Chaos boltguns. Further I removed the belt of ammunition, replacing it with a sickle magazine from another boltgun. Finally, I cut off the weapon on the terminator’s wrist and swapped arms such that the weapon is held in an outstretched position as if being shot.

I also removed the bayonet (and the pseudo front site) from the front of the Reaper autocannon, while only a subtle modification I think it vastly improved the look of the weapon (removes a lot of the comical nature from it).
Having recently purchased one of the new Burning Chariots of Tzeentch, I realized one of the little floating books that came with it might fit well with the Tzeentch theme I wanted to convey in the terminators; an eldritch tome of forbidden lore, augmenting these Veterans of the Long War’s already formidable knowledge.  The books ended up being a very apt size, and the streamer of magic energy that held it up worked perfectly to suspend it right in front of the terminator.

At this point the entire squad is battle-ready, but I still feel like I need to put a little more effort into making each member of the squad unique. Many I feel would benefit with some more gear or equipment around their waist, bulking them up a little and suggesting they have been to Hell and back, and are ready for anything. Also, I plan to nick and scar up their armor with an x-acto knife, in an effort to make their armor looks worn and weather by constant conflict.  Any suggestions for additions or changes to the models would be greatly appreciated. Also if you have any suggestions for other terminators that could bolster the unit feel free to comment. Hope you like them!