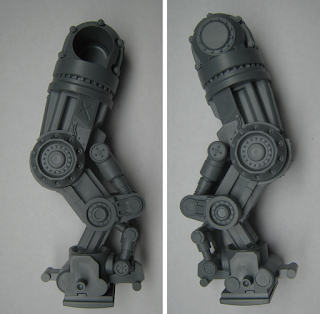 All of the pistons have been added, now for the armour!

The majority of each leg is identical to the other (therefore you get 2 copies of sprue A), simplifying the assembly considerably.  To make one of the legs left, the other right, all you need to do is rotate the top piece that connects it to the hip (which is done after it is assembled).  To define each one further, there are two distinct sets of leg armour plates (Sprue B and C) that are mirror images of each other.  Luckily, after adding them, you can simply rotate the top piece of the leg, as I mentioned earlier, ensuring that you really cannot add the plates to the “wrong” leg.  This make the assembly relatively foolproof and worry-free.


The aspect of the legs that had me the most worried was adding the tension screws.  Once added, they are covered up by other pieces, so that you can never go back and adjust them.  What’s more, DreamForge commented on their blog that you need to be careful when adding them, because you can strip the plastic if you tighten them too much.  When I tried to add them, I quickly discovered that the small screwdriver provided is useless (which they noted on the blog, but there is no indication in the formal instructions).  The head is not large enough to prevent it from skipping out when trying to apply the screws.  Also, you need to apply a large amount of force to get the screws to actually add any tension.  A few of the initial screws I added ultimately provided very little useful tension, because I was afraid tightening them further might damage the model.  I found that if you pinch the two pieces you are screwing together, the process is easier and more fruitful.  Thankfully, even if you do not do an excellent job of applying the screws, there are enough parts that get added to the legs to restrict unintended movement, making them stable regardless.  I suspect when all is said and done, I will glue the legs to fix a final pose, which makes the screws even less of an issue.  Their inclusion is a nice touch, whether you want to keep it fully posable or just to keep it steady to facilitate the search for a dynamic pose to immortalize it in.

There are two additional things I would like to note.  The first is that despite the warnings conveyed by DreamForge on their blog, I have been using super glue to assemble the majority of the model.  I use Krazy glue on all my models, metal, plastic, and resin and have a very good working understanding of it.  I do not really like the thick plastic glue that they suggested (or GW’s) because it oozes everywhere when two pieces are pushed together.  Having finished the legs, I am comfortable saying that the bonds are strong, and I do not regret the decision to stick with superglue. For a few select areas I used Tamiya Extra Thin Cement, however.  It has a water like consistency and relies on capillary action to be applied (you just touch the brush contained in the lid to the seam you want to bond and the cement is sucked in).  I used it on the heels of the Crusader, allowing me to dry fit it together and apply the glue after it was “assembled.”  I did not want to use superglue because it might create a bond before I had fully slotted the heel to the rest of the foot.  The second point I would like to note is that having worked with the plastic pieces of the kit, I have discovered that the hardness of the material makes it more difficult to make smooth than GW plastic.  Sanding tends to scratch it slightly, requiring you be more precise and careful with it.  It is still nice and easy to work with, but still a step below GW’s formula, in my opinion.  I feel that this will be more critical with their single soldiers, rather than their titans, as they are so small and finely detailed.  You will have to be extra careful when trimming and sanding them.  Again, this is really not such a bad thing, just something to take note of.


Having finished the legs, I am still very impressed by the kit.  From the sprue layout, to the instructions, to the overall design, it is all class-act.  I am excited to move on to the rest of the kit and see the Crusader start to come together! 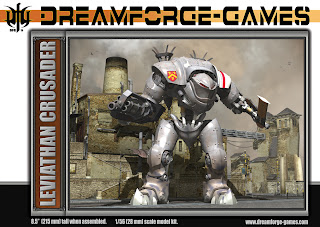 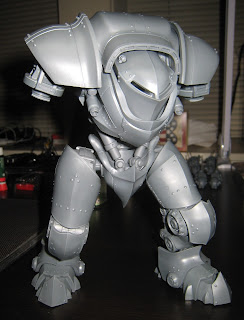 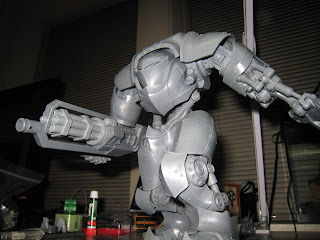