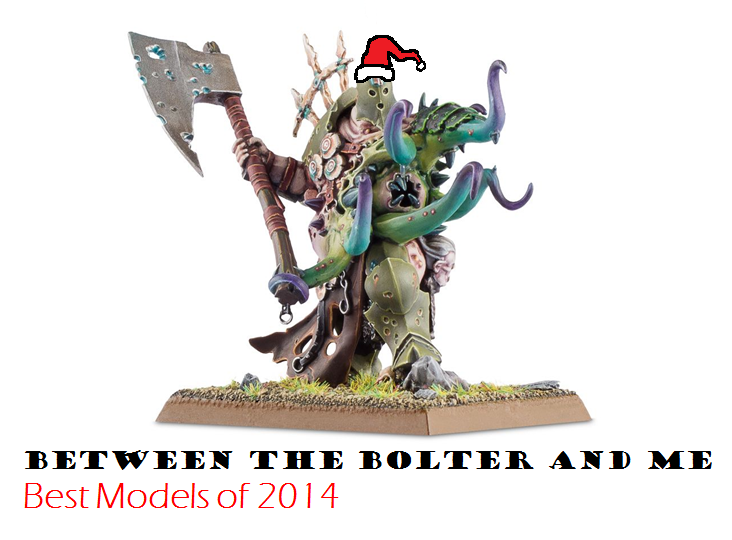 
Games Workshop:
One cannot talk about wargame miniatures without mentioning Games Workshop, and as you would suspect, the leader of the wargame market has produced some impressive models this year.  The release of the 7th edition of Warhammer 40,000 and the coming of the End Times in Warhammer provided fertile ground for exciting models.  In addition to releasing some standout models, a few of their kits also serve as excellent springboards for conversions and will doubtlessly be featured in many exciting modeling projects in the years to come.

Imperial Knight Titan:
Does any Warhammer 40,000 fan not like titans?  No, we think not.  But until this year, the only way you could really experience the joy of having one of these walking gods was to give Forge World a small fortune to get one of their Warhound or Reaver Titans (and that is saying nothing of the substantial time needed to assemble the model).  Games Workshop has explored the Titan Legions with games like Epic and Adeptus Titanicus for years, providing a host of smaller titan variants that could potentially be produced for Warhammer 40,000 as a plastic kit.  That hope ofinally came to fruition with the release of the Imperial Knight Titan.  For the first time, one could purchase a titan, albeit the smallest one, for a somewhat reasonable price, built from plastic, a material far easier to work with than resin.  Just this fact alone would be enough to celebrate, regardless of the quality of the sculpt, but what Games Workshop gave us was nothing short of miraculous.

The model is an excellent blend of the classic Epic Knight and its larger Forge World brethren, maintaining the characteristic hunched look of other titans, with the head mounted in the chest rather than on top of the machine’s body.  The entire model is covered in broad, impressive brass-rimmed armour plates, and has a collection of grim armoured face-masks.  The kit comes with an array of devastating weapons, including a fantastic looking chain-blade and thermal/melta cannon.  Uncharacteristically, Games Workshop even made the arms have a locking mechanism that allows you to remove (and possibly replace) the arms.  The Knight caused quite a stir this year, and even launched a whole line of excellent Forge World Knights.  Without question, the Imperial Knight was one of our favorite models of the year.

Putrid Blightkings:
The coming of The End Times was quite a surprise, along with pretty much all the kits that have been released with it. The Putrid Blightkings came out of nowhere and managed to  be the single release that no one knew they wanted, but after seeing them, everyone realized that they had been craving them for years.  Nurgle has always been one of our favorite Chaos gods; its intriguing mix of entropy and decay, combined with a jovial sense of humor has fascinated us.  Interestingly, although this is conveyed in illustrations and stories, it rarely came through in the models, except in a few rare cases (Brian Nelson's Nurgle lord and the new plastic plaguebearers).  The blightkings changed all of this, building off of the excellent armored warriors of chaos, they added all manner of nurgle elements, essentially allowing you to build an entire unit of chaos lords.  Each is brimming with character, with bloated arms, convulsing maws, and corroded weapons.  The kit allows you to create models that capture the magic present in so much of the Nurgle artwork over the years.

It is not surprising that this release took the hobbying community by storm.  Within a week of its release, the internet was awash with conversions using the models.  People like Jeff Vader and Krautscientist created some fantastic models for use in 40k.  Between the Bolter and me even stepped into the craze and started to create a unit of Death Guard terminators!

Tempestus Scions:
No miracles only men.  This sentiment encapsulates one element that draws me to 40k, and that is the human element.  It is hard to relate to horrid daemons or graceful Eldar,  but the human condition easily shines through with the struggles of the Imperial Guard.  This makes every release for them exciting to us, and this year we got a particularly special release with the Tempestus Scions.

It is hard not to get excited about these hard-as-nails veteran soldiers.  For the first time in many, many years, we finally got plastic storm troopers, and excitingly, they were an amalgamation of all of the previous storm trooper releases over the years.  From the berets, to the bulky hotshot lasguns, to the insectile goggles, they are truly a trip down memory lane.  It came as no surprise when the kit was championed by the growing Inq28 community to create grizzled guardsmen, mechanicus soldiers, and inquisitorial operatives.  We even got caught up in the craze!

Forge World:
I do not think Forge World has ever had a slow year since its inception many years ago, this year being no exception.  Like last year, they primarily focussed on the Horus Heresy, which is not a bad thing in my book, resulting in the release of some incredible Primarch models and fleshing out the long-neglected Adeptus Mechanicus.

Primarchs:
As I mention earlier, 2014 was an exceptional year for getting new Primarch models, with Simon Egan painstakingly sculpting three Primarchs:  Warmaster Horus Lupercal of the Luna Wolves/Sons of Horus, Vulkan of the Salamanders, and the Night Haunter, Konrad Curze of the Night Lords.  Each is very unique, emphasizing the defining attributes of their legions, effectively capitalizing on the mythic status of the characters.

Thanatar Siege-automata:
Looking back, it really seems to have been a year of large mechs, starting with the Imperial Knight, only to be followed up with a host of stunning Forge World Knights.  This craze even extended to the Adeptus Mechanicus, with the release of the hulking Thanatar Siege-automata.  Will Hayes took the concept that was being explored with the  Castellax battle-autmata and pushed it to its limit, creating a formidable looking siege engine that even makes Contemptor dreadnoughts look paltry.  Its Mauler Bolt cannon is particularly impressive, with its formidable armoured ammunition belts and ammunition hopper.  If the Siege-automata is any indication, the Mechamicum are likely to contiune to receive fantastics models.  Now, all we need is for Games Workshop to start making some plastic Followers of Mars.

Wyrd:
Continuing their trend of updating their old range of models with digitally sculpted ones to accompany the 2nd edition of Malifaux, Wyrd is getting closer to completing all of the characters in the core rulebook, in addition to creating some models for characters in their new Crossroad expansion.

Ophelia LaCroix Crew:
One of the things I love about Malifaux is the interesting juxtaposition of a very diverse set of influences, and nowhere is more evident than in Malifaux’ Gremlin faction.  And this year, they released a particularly delightful addition with Ophelia LaCroix’s Wild West themed desperadoes. We have a soft spot for cowboy/western films, particularly those featuring Clint Eastwood, so it was a joy to see many of the classic western tropes worked into many of the models (not to mention their comical emulation of Pertida Ortega’s crew).

Von Schill Crew:
While not receiving as much attention on our blog as Ophelia’s crew, one of my favorite crews released this year was Von Schill and his Freikorps recruits.  Aesthetically, each of the Freikorp mercenaries are a unique blend of World War I/II paramilitary soldiers and steampunk desperadoes.  They all wear distinctive armored body suits covering them from head to toe, with a chest mounted oxygen tank to support each of their gas masks.  I love how their gas masks resemble goggled World War II aviator/ bomber masks.  Each also has a host of notable wargear, from curved kukri’s to delicate revolvers fashioned after the Colt 1851 Navy.

Perhaps my favorite of the model in Von Schill's Freikorp is the Trapper, a sniper armed with a long clockwork rifle.  Fittingly, the model is crouched in a shooting stance shouldering his longrifle, lining up his sights. They even remembered to include a lens cover for the scope of the rifle!

Corvus Belli:
Corvus Belli had an exciting year, culminating with the introduction of the 3rd edition of its ruleset for Infinity.  To celebrate this major step, for the first time ever, they released a boxed game/starter set for Infinity, complete with re-envisioned and redesigned Nomad and  PanOceania troopers.

Operation Icestorm:
The aforementioned boxed game might be the nicest collection of models featured in starter set that I have seen since I started playing miniature wargames. Nearly all of the models in the set are posed in a combat posture, rifle shouldered and ready for action.  I also really appreciate that all the soldiers look to be a part of a uniform fighting force, many equipped with standard battle rifles, rather than a disproportionate number of special and heavy weapons.  Each model has its own personality, which is primarily conveyed through unique faces rather than absurd poses.  It has been years since I felt the need to get a boxed starter game, but this year I could not wait to get Operation Icestorm.

Model of the Year

There were so many fantastic models released this year that picking a favorite is an incredibly difficult task.  If it was based on which model most inspired us towards greater modeling feats, it would go to the Putrid Blightkings without question.  If it was to go to technical brilliance and sculpting prowess, it would go to one of Simon Egan’s Primarchs.  Likewise, if it was to go to the model that conjured up the most childhood memories that led me to this hobby, it would be the Imperial Knight.  But this year, we decided to focus on something a little more subtle, and feature a model many may have missed.  We wanted to showcase a model that fit with our sensibilities about creating models.  It is easy to get caught up in intricate detail coupled with dynamic “Hollywood” poses.  Therefore, one can overlook a model that strikes a careful balance of reasonable proportions and a pose grounded in reality.  One model stands out in this regard, eschewing all the showy trappings that many science fiction models can fall prey to, and that is the Kazak Spetsnazs soldier with a compact boarding shotgun, which was just released  in December.  He is a no nonsense looking model, carrying an array of equipment suitable for his covert operations.  Impressively, his shotgun actually looks like one; it is spartan and functional without being comically oversized.  And while this might not seem like a big deal, I really cannot think of another model like it.  The gasmask ties the entire model together, emphasizing his clinical pragmatism.  It is refreshing to see such a model, particularly when I feel that I spend so much of my modeling time downsizing 40k weapons and making them look more sensible.  While not the flashiest nor the largest model of the year, the Infinity Kazak Spetsnazs model reminded me that subtlety and care can go a long way, making for something much greater than the sum of its parts.