In case you were still uncertain of Games Workshop/Forge World’s most talented sculptor, Simon Egan’s next masterpiece was just revealed on Forge World’s website, a battle scene depicting the faithful dual between Garviel Loken and Ezekyle Abaddon.  It has only been a few months after his stunning vision of Angron, Primarch of the World Eater was released, showing the world that Forge World’s ambition to recreate the the Sires of the founding Space Marine legions was not one of misguided arrogance.

Egan’s strongest talent is probably his ability to sculpt unique, emotion filled faces.  Rather than simply recycling one of the over-used space marine unhelmeted heads, Loken and Abaddon's faces were sculpted to be genuinely unique (like Angron, both even have eyebrows sculpted!).  The anger he has crafted into each of them is remarkable. Thankfully, both of their heads are actually to scale and not comically large (unlike the new World Eater Rampager squad...).


Both Abaddon’s Cataphractii terminator armour and Lokan’s Mk IV power armour was entirely resculpted; although subtle, the armour is slightly broader than the normal versions offered by Forge World, making them even more imposing. Further, Egan takes pains to accurately proportion each component of the characters’ armor. This is particularly evident when you come compare his Space Marines with some of the Space Marine releases from Games Workshop and Forge World in the past. Several sculptors have a tendency to make Space Marine legs too narrow and/or short (very evident with Forge World’s MK IV Maximus Armour). On top of his attention to proportions, Egan also has an eye for detail and manages to incorporate a wealth armor embellishments to each of the characters’, making their suits of armour unique. Each of the wide and layered armour plates are edged by fine trim and covered with the Eye of Horus and other iconography (I love the tiny leather straps and buckles on the breastplate of Loken’s armour). Even more impressive, he manages to incorporate all these elements of detail with such care that the they do not clutter the model and actually seem like natural extensions of each figure.

To fit with the hatred evident in the models' faces, their poses are suitably dynamic.  Loken is charging forward, Tigrus bolt pistol outstretched, directly into the midst of a taunting/challenging Abaddon.  Along with his bolt pistol, Loken has an impressive looking double handed chain blade (Paragon Blade), while Abaddon has a brutal looking powerfist (with pointed fingers) and either a combi-bolter or a simple and elegant power blade.


Like with Angron, the new kit retains the slotted scenic base design, allowing each model to be removed and used in games when not showcasing their confrontation (Loken on a 20mm and Abaddon a 40mm base).  It too comes in an impressive black box stenciled simply with "The Horus Heresy" in silver.  Unfortunately, the models come at a very high price of 55 pounds (around $83).  The high price will be inhibitory to many people, even in a hobby as expensive as this one.  In the end I feel it is worth it, as I think they are some of the nicest models I have ever seen, in any miniature game (the only model that I think rivals them is Angron, ha ha). 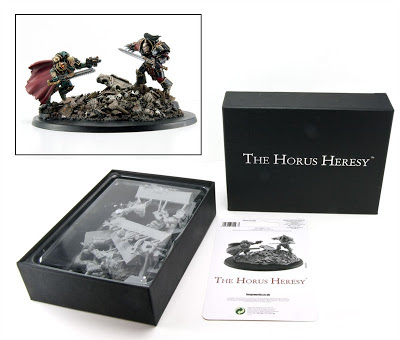 Humorously, the parts shown in this box are for Angron...

If you would like to hear a bit more about the design process, Forge World put up a short interview with Simon Egan on their youtube channel.  And while it is pretty short and not that much is revealed, I am pleased that Forge World realizes how special the models are and that people are interested in the design process (I know I certainly am).