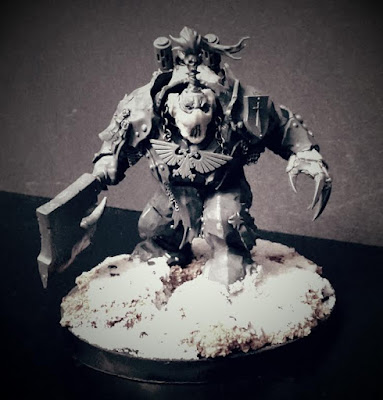 Last month we wrote about a project that the Observer, over at the Bolter and Chainsword forum, has been working on that involves our Church of the Red Athenæum. His Inquismunda project Beneath Terra is doing a fantastic job of exploring the background behind one of the lost Space Marine Legions. If you have not read our first post about his project, go and read it promptly and more on the Bolter and Chainsword. Here we wanted to share his background for Logarach, a gigantic mutant who has ties with the Church of the Red Athenæum.


Logarach and the Enduring Sacrifice:
Although the Church’s holdings on Holy Terra are under the purview of the Order of the Crimson Hour, they rarely leave the birthplace of mankind in large numbers.  Therefore when missionaries of the Church leave Terra to spread the Church’s teachings and start new parishes, they often go with a small coterie of individuals with a steadfast conviction in their beliefs that can help them wade through the violence and hate that is the hallmark of the present day Imperium.  One of these accompanying souls is always from the warrior lodge of the Enduring Sacrifice, an organization of warrior monks founded by the Church that predates the Order of the Crimson Hour.  When the Church was initially founded, it needed an organization to guard the fledgling faith from wrathful outsiders and gang warfare, but when the Order of the Crimson Hour was formed some 55 years later, its members shifted its focus to spreading their creed of suffering offworld and guarding the newly established shrines of the Red Athenæum.  Vivere est Pati.

Logarach is one such holy guardian.  Although there is no form of rank or leadership in the Enduring Sacrifice (for we are all equal before the eyes of the Emperor), Logarach is one of its oldest members, a devoted follower of Chandrakesan’s sermons, witnessing that first Red Hour and the rise of Archbishop Remus Ormond and foundation of the Order of the Crimson Hour.  When the Order was formed, many members of the Enduring Sacrifice took oaths and had their vocal cords severed, joining the Sisterhood, but a few, including Logarach, stayed behind.  While the Order of the Crimson Hour was to be the Church's fighting force, its armored fist to smash its opposition, the Enduring Sacrifice would have a more reserved role, serving as permanent guardians of the Church’s sacred shrines and relics.  Furthermore, they would accompany the Church’s missionary ventures offworld, defending newly established bastions of their faith.

Although I would highly suggest that you go to the Bolter and Chainsword thread to read all the posts leading up to this one (Act X), briefly, an astropathic message has been emanating from the depths of Terra stating only: The Fire fades. Father, it is time.  Believing this is a harbinger of the coming End Times, Lord-Inquisitor Laurenz Kotophardi ventures deep into the bowels of Terra to find the source of the message, who he thinks may be a surviving member of the lost XIth Space Marine Legion.  During his search, he finds his old mentor Lord-Inquisitor Alexei Naudrić, who had disappeared years before searching for the lost Legion.  In the following passage, Laurenz meets Logarach of the Church of the Red Athenaeum, who is also interested in the fabled XIth Legion. 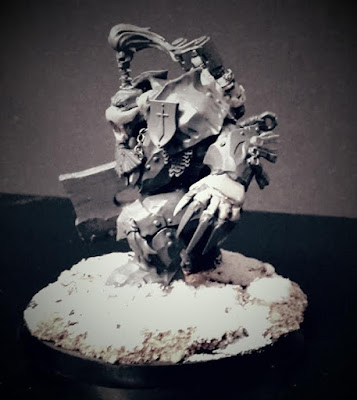 “From pain cometh misery. From misery cometh determination. From determination cometh strength. From strength cometh pain. ‘Tis the adage of the old blood and ‘tis the adage of the gracious Lord, may his misery pave our path.”
-239th Fragment of the Book of Lindenburg, Sage of the Flame
“He is old, impossibly old. A mutant? Absolutely! For goodness’ sake Laurenz, look at him! He is as tall as two Astartes and thrice as wide. A naturally born mutant however? No, I don’t think so. There clearly was some kind of tampering involved with him. The Biologis might classify him as a stable genetic off-shoot. Who knows what fruits of Old Night are picked each day on Terra alone?”
-Alexei Naudric, private conversation
“So calm, like the sea, the ever-whispering and yet silent black, inky, cold, oceanic horizon. Not a single trace of fury knifing in his mind-flesh, no-no, despite the heavenly pain that wracks his body day-in, day-out. Sleep is foreign to this Warden, gracious Lord, just as true belief is. Will you show him a new path, oh most gracious Lord? Or must he wander about in darkness, like the rest of us?”
-Ivanka, Cradled in Logarach’s arm 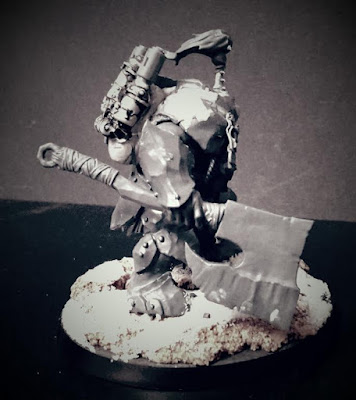 ---PICT-CAPTURE---
“Logarach, I assume?” To be frank, I was about to evacuate my bowels as I directed this question towards the mutated brute. Simian in shape, even while sitting he towered over anyone in our ramshackle group. His armour was a patchwork of red, bone and white, all brought together through silver scratches and dirt. Faint latticework, embedded in arterial red, glimmered in the dirty light of the subterranean archive and made him appear like some portrait of ancient Rebirth-Terra that has come alive.

“Let’s assume, in turn, that I am”, His voice was a deep, mechanical grinding, “What of it?”

Before actually answering, I took a few seconds to contemplate who I was talking to, well supposedly anyways. This monstrosity of muscles and iron was part of a mystical, borderline heretic group I was set on to investigate several decades ago: The Church of the Red Athenaeum. In his right hand, one still of flesh, he held an axe, more a sharpened slab of adamantium really, and in his left, a mechanoid claw, he held a whetstone.

“Well?” He did not avert his gaze from his work “Swallowed your tongue?”

Maybe. I don’t know. I have seen much in my life, but the past few months have confronted me with much I am still struggling to process.

“I was told that you worked for a possibly heretical organisation.” I tried to sound as convincing as I could, but my hands were sweaty and shaking, “Care to say anything about this?”

“The Church of the Red Athenaeum?” Thick fog left his rebreather-mask as he sighed, “Yes, no, maybe, probably, depends on what you wish to hear, I'd say. Though whatever that may be, I'd refrain from calling it heretical by any means, it has proven...detrimental to one’s immediate health on more than one occasion. Then again, you are not here to have a theological discussion with me Laurenz, are you? What is it you truly want to know?”

“Why have you left and who do you serve now?” His refusal to meet my eyes made me wary, insecure. For fug’s sake, as if I was a child in the Schola again.

“Who said I left?” There was a faint rumble in his mechanoid throat. A chuckle?

“Well, from what I know, this church of yours is not famed for such civil discourse and much less for denying connections. One bears one's faith on his skin, no?” My throat was dry, my voice cracking slightly.

“You don’t really know much about us, do you?” The whetstone passed the edge of the ax in slow, measured motions, “We don’t work for each other, well not in a way your bureaucratic moloch of a church would understand. It would be pointless to explain to you. So much power at your hands and yet so little wisdom. Sometimes paths split apart, only to meet once again. Two priests can walk two different paths, does not make their faith's different. I was once a protector, a guardian, but we live in an age that requires none. Now I search, but my faith is that of the Emperor. My soul, much like my flesh, is His.”

“How did you find your way into Lord Naudric’s service then?” The faint singe of anger stung in my stomach, I would not get any understandable answer out of him, not just yet, “Maybe that is something I might understand, yes?”

“Don’t be offended friend. There is no shame in ignorance, only in the unwillingness to change so.” Logarach laughed, if I interpreted the throaty thundering correctly, “I don’t serve Naudric. I am oathed to a friend of his: Lord-Inquisitor Liram Malathrach, son of Terra and member of the Ordo Chronos. As he disappeared following the Kaledian Insurgence in the Ghoul Stars, I chose to protect one of his few friends, until he returns to us.”

Hmmm, I thought, the Kaleds, a familiar name… A very destructive and highly dangerous Xenos race that employed cybernetics and geno-modification to maximize killing potential, if I am not mistaken.
“And what does your church have to say about this? You see Logarach, it makes no sense” I begun, my eyes fixated upon the massive, golden aquila on his chest, “How can you serve an inquisitor while your church, your very ideals are being prosecuted by all of us. Furthermore, how do you fit into our search? What could the end of this path promise to you?”

“The Inquisition a tool that hunts with unity and in harmony with its many parts? You’d be a fool to think I would believe that. You’re like a squabbling mass of dogs, no direction, only bickering and chaos. Liram sought me out. That’s all I will say for now about him.” Carefully he hid his whetstone in a pouch and inspected his prosthetic claw, “Tell me Laurenz, what is the Lost Sinner to you? Now that you understand a bit more, I mean.”

“A sliver of hope.” I answered without hesitation. If this all was true, then we could potentially repair the Golden Throne, maybe even increase its efficiency. Mankind could usher in a new age of prosperity, of Light. “And to you?”

“Coincidentally, just the same.” I shivered as his eyes focused on me, one a ghastly orb and one a gaping hole. He slowly rose to his feet, like a cyclopean monstrosity of ancient, paleolithic oceans, and mustered me. Now I finally understood what his church wanted, what they desired. For them, hope lay in Darkness, in the words of Doomsayers, the blood of Pilgryms and the souls of sons once cast out.

The earth shook around us as I tried to answer and, if he could, Logarach would have grinned now.
“My brothers and sisters just now follow such a sliver of hope” He cocked his head, “But we both know that there are many paths to take and much to sacrifice Laurenz, don’t we?” 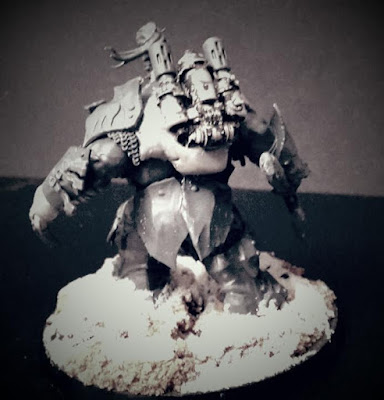 
I hope you have all enjoyed these two posts showcasing The Observer’s work!  It has been a fantastic time working with him, one that allowed us to further develop the Church of the Red Athenaeum (albeit virtually all of the ideas were his, with us shaping the Enduring Sacrifice out of those).  I hope we get the chance to work with him again in the future!  Again, if you have not been following his work on the Bolter and Chainsword, I would suggest you head there now!

Email ThisBlogThis!Share to TwitterShare to FacebookShare to Pinterest
Labels: Beneath Terra, Bolter and Chainsword, Logarach, the Church of the Red Athenæum, The Observer, XI Legion