In case you were still uncertain of Games Workshop/Forge World’s most talented sculptor, Simon Egan’s next masterpiece was just revealed on Forge World’s website, a battle scene depicting the faithful dual between Garviel Loken and Ezekyle Abaddon.  It has only been a few months after his stunning vision of Angron, Primarch of the World Eater was released, showing the world that Forge World’s ambition to recreate the the Sires of the founding Space Marine legions was not one of misguided arrogance.

Egan’s strongest talent is probably his ability to sculpt unique, emotion filled faces.  Rather than simply recycling one of the over-used space marine unhelmeted heads, Loken and Abaddon's faces were sculpted to be genuinely unique (like Angron, both even have eyebrows sculpted!).  The anger he has crafted into each of them is remarkable. Thankfully, both of their heads are actually to scale and not comically large (unlike the new World Eater Rampager squad...).

Over the years, the Chaos daemons have had numerous waves of releases, some were superb while others have leaned towards abysmal. Now, it seems they will be getting another swath of new models and even new books, both for Warhammer and 40k. This is not long after receiving a White Dwarf update and new miniatures to go along with it last year (including plastic Flamers  and Screamers of Tzeentch, plastic Plaguebears and Nurglings, and a some Slaanesh chariots). While some of these pictures have been floating around the web for a few days now, I wanted to wait for Games Workshop to put up clearer images. In this post I will comment on the new models while referencing the old models to bring up some points about their evolution.

It seems that a week can’t go by without Forge World releasing another new awesome model, one that makes it difficult to reason with yourself why you shouldn’t own it too. And with the release of the first Horus Heresy book, Betrayal, it has reached a fever pitch. But looking back, I feel it can be argued that the release of the Contemptor Dreadnought was a turning point (and foreshadowing for the Heresy) for Forge World in this regard. As soon as the kit was released, blogs from around the world exploded with their own versions of the dynamic armored behemoth.

The model was very well received, partially owing to its reimagining of the old concepts (the bulbous nature of it really harkens back to the original Rogue Trader design) and the model’s insane level of poseability (something largely unseen in Games Workshops larger models). This high degree of poseability comes at a high cost however. Aside from being fairly difficult to assemble, the model can very easily adopt an awkward pose despite one’s best intentions.  Before long, the grim defender of humanity can transform into a caricature of Space Marine might (maybe just skipping along or attempting some acrobatic marvel). 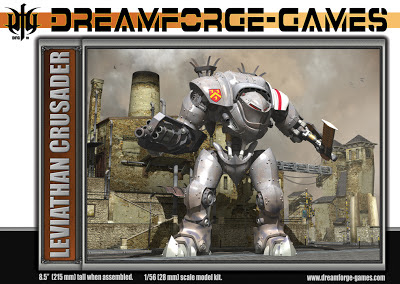 I had been receiving steady updates over the last two months about the production and eventual shipment of all of the Crusader kits from China.  Last week I got word that they were finally being shipped to the Kickstarter backers and I got a UPS tracking number.   I am excited to say that the kit arrived in the mail today!  This is going to be the first post in a series chronicling my assembly of the Crusader.  In this first post, I am going to talk a bit about my initial impressions of the kit.
Read more »
Posted by Eric Wier 3 comments:

The Unforgiven: Leading the Deathwing

One element that has changed with the introduction of the new Dark Angel’s book is the HQ selection.  Before there was really only one choice, and that was taking Belial to unlock Deathwing as Troops.  There were other choices, Interrogator Chaplains, Librarians, but none of them really brought anything useful to a Deathwing army.  The new book has given us multiple options that deserve serious consideration.

For my second Dark Eldar post, I want to talk about some of the Dark Eldar warriors I have built. The new sculpts have come a long way from the originals, both in aesthetics and design. One of my favorite aspects about them is that all of the equipment is attached to their waists, including things such as toxin vials and grappling hooks (which they use to hang from their flying transports). I feel these small additions go a long way in establishing their character and convincing me they are going to war. I am glad they chose to cast the equipment on the models, rather than keeping them as separate pieces for you to glue on (easier to assemble and the stuff is attached more naturally than one could achieve otherwise). Additionally, the new warriors are much easier to assemble. The old ones were something of a nightmare to build if you decided you wanted to use any of the tiny rows of spikes and blades to adorn them; trying to line them up correctly was nigh impossible.

The Unforgiven: Moving forward with the Deathwing

With the release of the new Dark Angels codex, the Deathwing were put in a difficult situation.  From a modeling perspective, things have never been better.  The release of the new Deathwing command squad box has added a host of interesting and flavorful bits, most exciting to me being the inclusion of the daggers that always used to accompany the Deathwing (as iconic as the feathers).  The exciting conversion opportunities afforded by these new pieces are somewhat diminished when considered in light of the Deathwings’ actual rules on the tabletop.  At first glance, everything seems fine;  terminator squads can still take mixed weaponry and they have gained a few new special rules (splitfire, vengeful strike, and an improved Deathwing assault).  Unfortunately, the points cost of the unit has gone up considerably to reflect these additions (a squad with 5 thunder hammers and storm shields with a cyclone missile launcher moved from 235 to 270 pts)  And if you want to take them as troops, you still need to pay the Belial tax (he is better than before, but is considerably more expensive, as well).  I will not expound upon these shortcomings any further, but if you would like to read more about it, Kirby over on 3++ details it quite well.
Read more »
Posted by Eric Wier No comments: